"Many people look forward to the new year for a new start on old habits." (Author Unknown)

Indeed, this is the time when we get the chance to introspect and think about all the things that we used to do. Sometimes, in that introspection, a realization dawns and makes one question, "what made me stop something which is actually a good habit?".

In that state of introspection, I was trying to understand why I wrote like 2 posts in the past 2 years! I realized that somewhere between the spaghetti of material and spiritual life, the blog just got forgotten.

Its a few days after New Yrs day but I finally decided to brush off some dust from the blog and hopefully I can stay firm this time around =)! 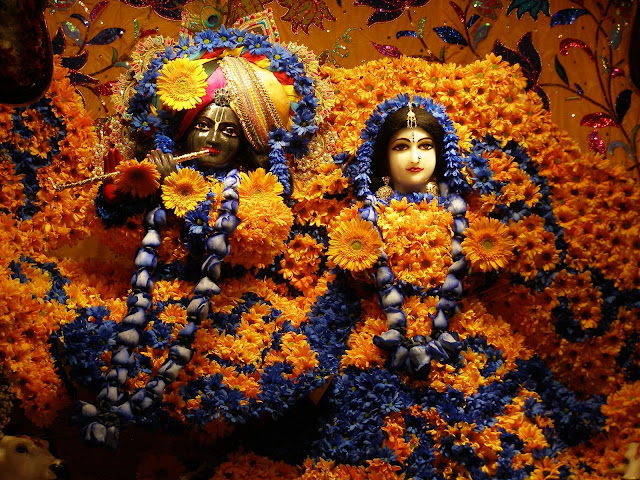 "The demigods and great saintly persons showered flowers in a joyous mood, and clouds gathered in the sky and very mildly thundered, making sounds like those of the ocean's waves. Then the Supreme Personality of Godhead, Viṣṇu, who is situated in the core of everyone's heart, appeared from the heart of Devakī in the dense darkness of night, like the full moon rising on the eastern horizon, because Devakī was of the same category as Śrī Kṛṣṇa."
(SB 10.3.7-8)

With Krishna Janmashtami just around the corner, and with loud thunder and lightening outside, can't help but get more excited thinking about Janmashtami!

Washing away our anarthas

Yes, it has been LONG since I last blogged! A lot has happened in my life since the last time I blogged, which incidentally was just over a year ago, graduating from university, getting initiated into this movement under the shelter of HH Jayapataka Swami, a brilliant 2009 Ratha-Yatra etc etc etc..

I wasn't taking a blog hiatus because I didn't know what to write about as there was so much happening! But most often, it is the smallest thing that can result in a realization that I would like to share with you all.. like rain...

For those of you who were in Toronto for the Ratha-Yatra a few weekends ago would remember that the City of Toronto was on strike resulting in piles and piles of garbage. A few days ago, the protestors and the government reached a conclusion and work began for the clearing of the streets. Lord Indradev decided that he should also take matters into hand and today was one of the strongest rainfall I had ever seen in Toronto this year!

After over an hour of torrential downpour, the rain subsided and I thought that this was probably the best time to for a japa walk. As I walked down the familiar roads which till very recently were infested with garbage seemed unexceptionally clean today. The fresh smell of rain hitting the earth was in the air and everything seemed so bright, clean and beautiful.

On my way back I was meditating on Lord Balarama as it is his glorious appearance day tomorrow and I couldn't help but remember our last years celebrations at the temple where we had a really fascinating presentation about "Destroying our Anarthas" and how each of the demons Lord Balarama destroyed represented an anartha and by medidating on Lord Balarama, we can help to destroy those anarthas.

As my thoughts wandered back to the rain and dirt, I realized that just as the rain washed away the dirt accumulated in the city, the only way to wash away the anarthas and the dirt accumulated in our hearts is the rain of the holy name. As Vinodini mentioned in one of our conversations with respect to Lord Balarama, "We should pray that the plough of the holy name will bring the river of our consciousness to the lotus feet of Radha and Krishna". Indeed, this holy name, that has so wonderfully present in form of japa and kirtan is the only solution to purify our hearts.

Sitting in my office cubicle, I feel so weird - very weird. My cell phone isn't ringing constantly, my MSN isn't going on an overload due to last minute messages and my inbox has not a single email in the last 56 hours from the ratha-yatra2008 google group. 7 months of planning and working hard daily to make sure that we can present Srila Prabhupad this humble offering, the Toronto Ratha-Yatra.

Before going on forever about how fantastic this years festival was, I just thought of sharing my top 15 moments of the past festival week and here they go, in no particular order...

1) Watching the deities being carried into the cars and taken to the raths. Seeing Jagannath after 2 weeks felt good!!
2) Assembling the altar for the deities the night before the festival with the girls at Centre Island and giving Maduha Prabhu a very pleasant surprise..and also taking down the altar in crazy rainfall.
3) Seeing Jayapataka Swami after months and getting chastised by Maharaj for running around too much during the parade.
4) The Tunnel - 'Nuff Said
5) Bus Tour singing at Yonge and Dundas square - Toronto's equivalent of Times Square on Wednesday before the festival and random by standers dancing to the kirtan!
6) Anapayini getting a standing ovation from the 700+ people seated in the huge entertainment tent on Saturday after her Jagannathashtakam performance
7) Watching Devadatta Prabhu lead yoga classes amidst the pouring rain and people doing Yoga literally on the mud!!!
8) Pyari Mohan Prabhu's magic shows - made me want to become 7 again!!
9) Mahatma Prabhu's kirtan in the Bhajan Kutir..unbelievably soothing
10) Watching devotees from the Ganesh Mandir come at 10 am amidst the rain and storm to stand in front of Jagannath and read Visnu Sahasranaam, proving that rain or shine, devotees will come to sing the glories of Lord Jagannath.
11) Loading the pickup truck before the festival and being a part of Jaya Radhe's famous Monkey chain
12) Bus Tour kids leading the Saturday finale kirtan at the Festival site and having people dance in ecstasy!
13) The ENTIRE Ratha-Yatra committee and more trying to lift the kids jumping castle onto the U-Haul
14) Kirtan on the ferry back to the temple after the festival.
15) A huge smile on the face of every single person who attended the festival -devotees, vendors, performers and the general public.

Jagannath, Baladev and Subhadra Devi ki Jai!!
Posted by Madhavi at 7:38 AM 4 comments:

Why you must be in Toronto on July 19th and 20th

The 36th Annual Festival of India, presented by Toronto's famous Hare Krishna Centre, has its roots in ancient India and is coming to Toronto on July 19-20, 2008. The festival has been celebrated for thousands of years in India, and is replicated annually around the world. The same festival takes place in Europe, Australia, Africa, the United States, Asia, and elsewhere, but few rival the beauty and blissful mood of Toronto's. Over 35,000 people participate every year in this two day festival which provides a feast for your mind, body and soul!

But who cares?!?! Come for the mind-blowing sound in the Toronto Tunnel.... 'nuff said!
Posted by Madhavi at 7:19 AM No comments: Posted by Madhavi at 7:23 PM No comments:

Saturday marked the finale of the grand ten day out-reach festival, "InSpirit" organized by couple of the local Toronto Devotees as a forum to do active preaching to the Yoga and the Student Community.

His Holiness Devamrita Swami was the guest speaker for this festival and it was organized by the Bhakti Yoga Club and the Urban Edge Yoga, two outreach projects undertaken by the Toronto temple devotees.

Needle less to say, I am yet to come down for the whirlwind of the past ten days. It was an amazing experience, watching how powerful the Holy name and the teachings from Srila Prabhupad's books and see it being understood and experienced by a completely different audience.

To me, that is where InSpirit inspired. Every evening Maharaj gave interesting classes which were food for thought on different areas ranging from understanding "real" relationships, to spiritual economics to understanding environmental issues from an ecological stand point to understanding power of sound and Mantra meditation. Each of these talks were interspersed with unbelievable kirtan, led for the first few days by HG Bada Hari Prabhu and after he left for the Japa Retreat, Vinodini led the kirtans.

During these times of kirtan, I would look around the room, and often along with the foot tapping and clapping sounds coming from people who have never heard the maha mantra, I would see people totally moving into ecstasy at hearing the holy names.

At one particular program during InSpirit held at a popular Yoga studio in Toronto, the JivaMukta studio, I realized that this new generation of Yoga enthusiasts are not interested in Yoga because of Lulu Lemon, but because they are looking for something more. And this was evident during the kirtan session. As Bada Hari Prabhu started off with mellow chanting of Om Namo Bhagavate Vasudevaya, the holy name echoed in the main meditation hall and it seemed like one very powerful voice was chanting these names in harmony. And as Bada Hari Prabhu picked up pace as Keshav and Vinodini gave the beat and rhythm with the Mrdanga and Kartal respectively, one by one people stood up and joined us in dancing! By the end of Prabhu's kirtan, close to 30 of the attending 70 people stood up with arms high in the air, dancing and singing with us.

Speaking to a few of them during Prasad, they all expressed their joy and happiness and excitement saying that they have never experienced Yoga like this. They wanted to come back and do kirtan with us! After the program got over, while we were clearing up, so many of them stayed back to ask us questions and see how the instruments are played. And they were all so good at playing our traditional instruments!

As we were done cleaning up, I had rounds to finish, so I walked around the room and as I did my rounds, I could still feel the energy that had been created in that space due to the chanting of the holy name.

As I saw the smiling faces of the guests who had come for the Mantra meditation workshop, a smile crossed my face, as i clutched my japa bead harder, realizing how lucky I was to be given the chance to chant the holy names of the Lord.

InSpirit was named such that we are able to tap into that very being of our existence and try to understand our relationship with the supreme. It was truly an InSpirational ten days and I am really looking forward to more inspiration to come in the following days!
Posted by Madhavi at 11:26 AM No comments:

Stories of Other Spiritual Seekers..